Standing on the beach, he takes a mouthful of ice cold beer, staring wistfully southwards to where he knows lies the Great South Land, silently he whispers "Happy Australia Day"  and skulls a mouthful as a silent toast. 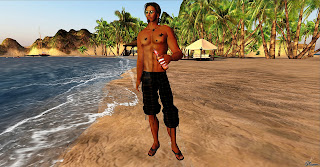 I'm enjoying the sun in Indochina so can't be at home for the celebrations, but I'll still raise a glass and no doubt find some Aussies where I am - I just need to look for the nearest bunch of yobs sinking some beers and singing the 80's classic from Men At Work!


I'm not sure if you know, but we have a citizen test now here in Australia, you get to sit an exam of 20 random questions chosen from a pool of 200 if you decide you want to migrate and become a citizen - Through my contacts I've scored a few of these questions, so if you ever wondered if you could cut it and become an Aussie, go ahead and give this a try:

1. Do you understand the meaning, but are unable to explain the origin of, the term 'died in the arse'?

3. Are these terms related: chuck a sickie; chuck a spaz; chuck a U-ey?

4. Explain the following passage: 'In the arvo last Chrissy the relos rocked up for a barbie, some
bevvies and a few snags. After a bit of a Bex and a lie down we opened the pressies, scoffed all the
chockies, bickies and lollies. Then we drained a few tinnies and Mum did her block after Dad and
Steve had a barney and a bit of biffo.'

5. Macca, Chooka and Wanger are driving to Surfers in their Torana. If they are travelling at 100
km/h while listening to Barnsey, Farnsey and Acca Dacca, how many slabs will each person on
average consume between flashing a brown eye and having a slash?

7. I've had a gutful and I can't be fagged. Discuss

8. Have you ever been on the giving or receiving end of a wedgie?

9. Do you have a friend or relative who has a car in their front yard 'up on blocks'? Is his name Bruce
and does he have a wife called Cheryl?

11. What are the ingredients in a rissole?

12. Demonstrate the correct procedure for eating a Tim Tam.

13. Do you have an Aunty Irene who smokes 30 cigarettes a day and sounds like a bloke?

14. In any two-hour period have you ever eaten three-bean salad, a chop and two serves of pav
washed down with someone else's beer that has been flogged from a bath full of ice?

15. When you go to a bring- your-own-meat barbie can you eat other people's meat or are you only
allowed to eat your own?

16. What purple root vegetable beginning with the letter 'b' is required by law to be included in a
hamburger with the lot?

17. Do you own or have you ever owned a lawn mower, a pair of thongs, an Esky or Ugg boots?

20. Who is the most Australian: Kevin 'Bloody' Wilson, John 'True Blue' Williamson, Kylie Minogue
or Warnie?

21. Is there someone you are only mates with because they own a trailer or have a pool?

22. What does "sinkin piss at a mates joint" and "getten para" mean?

23. How far would you wear your mockies?
Inside only?
Back yard only?
To the letter box?
To the milk bar for a packed of winni blues?
To the movies?
To shoppo? (large shopping centre)
To the pub?

Wondering about the answers? you know what they say, if you have to ask well then.....


Posted by Steam Engineer at 06:00 No comments:

This is my last post for a few weeks whilst I head off exploring through Indochina. I am looking forward to getting out of Aussie for a bit and visiting places I've never seen. I've got one of the Man Made Wonders of The World planned from the original 1968 list which I'm a little stoked about as it will bring my tally to 4 in total - only another 6 to go! 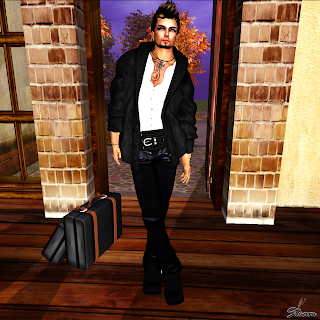 See when I'm back in February.


Posted by Steam Engineer at 10:00 No comments:

Just wondering, anyone feeling a little seedy today, anyone wake up on a park bench wondering what and how, come on hands up now!

I orginally posted a version of this earlier today on The Torch, a blog I also post on aimed at helping SL noobs with their first steps in world (your's truly as a fashion writer) but I liked it so much I thought I'd post it here as well, given it's January 1 and all....

Have a great day and a great Year...


Posted by Steam Engineer at 22:05 No comments:

Wishing You All The Best For The New Year, Hoping 2012 Is A Great Year For You.


He wears (other than not very much, something I maybe hope to emulate):
Tattoo- Wicked tattoo: Devotion
Pants - Loop: Kickout pants

Have a great new years!

Posted by Steam Engineer at 22:00 No comments:

I would have to say, not having a working PC at home has been an interesting experience, still in the end it finally arrived... and two weeks early so for that I'm grateful. Very interesting to see how far IT has infected all aspects of your life, especially when you don't have it!

I've actually had this outfit for a while, but courtesy of my old laptop I couldn't show it until now! It comes from the same team that created the Science Fiction Tuxedo I featured in my last post a few weeks back . It does includes a few extra options I've not shown including a ripped tee and a bunch of chains you can wear on your thighs, arms and torso... however as soon as I saw it knew it would right at home down at the crack den RP Sim... 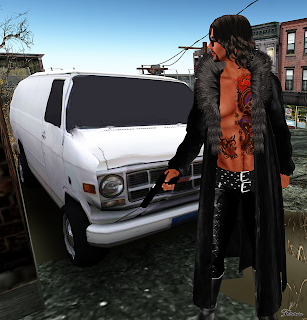 So until next time (which will be pretty soon)...
Posted by Steam Engineer at 14:39 No comments:

Always a science fiction tragic, I just hold of this this new release, the Science Fiction Tuxedo, an outfit put together by Egoisme and Gabriel. This is really an awesome outfit, a great fit with great textures - it really is impressive! 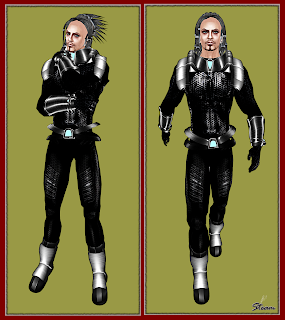 I threw on a skin from Venus Envy, added hair to suit from Tekali-li! and voila, a look that would look at home on any Sci-fi RP sim. Freakin awesome.

So until next time...
Posted by Steam Engineer at 12:00 No comments:

She Ripped My Heart Out - Part IX: Wishful Thinking

Time ticked on and my mind continually wandered. At night, which was always the worst I would dream of her curves, her lying body close to mine. I remembered the look in her eyes and the secret smiles we shared. I was still completely and absolutely hers, there was no other for me! 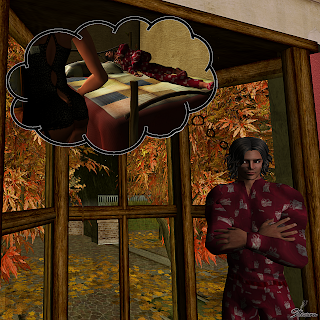 The Men Only Hunt runs for a few days finishing on December 17. As always, you can check the American Bazaar blog for details.

So until next time...
Posted by Steam Engineer at 14:30 No comments: